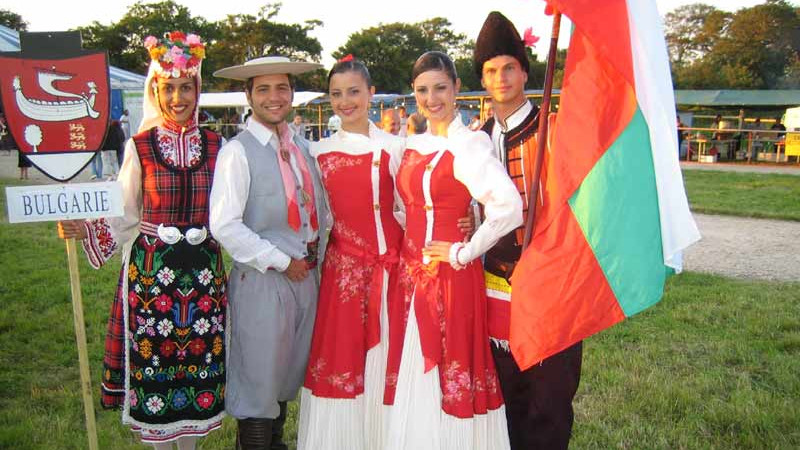 Zlatka Timonova is the chief artistic director of the folk Ensemble "Zlatna Trakia" - Haskovo. Professional dancer in the State Ensemble Trakia - Plovdiv. Professional director-choreographer with specialized higher education from the Academy of Music and Dance Art. A beloved and respected teacher.

Folk ensemble "Zlatna Trakia" was created in 1992. The ensemble is formed as a folklore block, consisting of two formations - children's and youth. Over 100 participants dance in it, aged from 5 to 22 years old. Each formation has its own characteristic appearance, determined by the peculiarities of folklore traditions, carrying the mood of different ages. The repertoire of the ensemble includes songs and dances from all the ethnographic regions of Bulgaria. Since its creation, the "Zlatna Trakia" ensemble has given solo concerts on all municipal holidays and spread the glory of Bulgarian folklore not only in the country, but also abroad. He participated in international competition festivals in Romania, Ukraine, Serbia, R. Cyprus, Italy-Sardinia, Greece, Turkey, Poland, Hungary, Slovakia, Belgium, France, etc.

Winner of the Silver Palm, winner of the first prize for choreography and performance, awarded with two gold medals. In its collection, it has many honors, diplomas and prestigious awards from world-famous, international competitions. Recently, the ensemble added another success to its annals, returning from the 15th international festival in the city of Izmir, where the talented dancers were welcomed with joy and hospitality, applauded at all concerts. For a great honor this year, in the month of August, the youth formation was qualified to participate in 3 consecutive festivals in France and Belgium. For 25 days, the ensemble gave concerts in almost all of France and part of Belgium.

Mrs. Timonova, since when has the children's formation of the "Zlatna Trakia" Ensemble existed and how many children are currently playing in it?

- Since 1992, under the name "Zlatna Trakia", but we are heirs of the Children's and Youth Ensemble for Folk Songs and Dances "Trakiiche", which was part of the Pioneer House, in which I started as an artistic director in 1989. At the moment, there are about 70 dancers children, in 3 age groups, without the youth formation.

What are your recent notable appearances and honors?

- Our last most significant appearance with the children is our participation in an international, children's, folklore festival in the city of Izmir (18-25.04.2007), Turkey, which is organized every year in connection with the children's week. We only have 1.06., and they celebrate all week!

At what age is it best for a child to start doing an extracurricular activity like folk dancing for example?

- I think that it is best for the child to start practicing Bulgarian dances from preschool age, but his training should be tailored to the child's capabilities. From the age of 5, children can learn elements of Bulgarian folklore and dance children's themed dances.

What do folk dances give to children?

- The child will touch the authentic Bulgarian art from all ethnographic areas. It will enrich your musical culture. It will strengthen physically. He will find new friends and learn to work in a team. He will gain independence and the ability to organize his time. He will increase his self-confidence by participating in dozens of performances in the country and abroad. He will be proud to be part of an ensemble that has won prestigious national and international awards.

Do you believe that the art makes people better?

- I believe and I am sure that all children who have passed through our ensemble are really better in everything. This helps them a lot for further adaptation in life, and the ignited spark for Bulgarian dances and songs never goes out!

Tell us about the pleasant experiences of your alumni during your last summer tour in France?

- From 30.07.2007 to 24.08. the ensemble participated in five festivals in France and one in Belgium. We received the invitation last year, when the ensemble participated in an international festival in Belgium. We started the tour with a 9-hour layover and a beach in Monaco, which thrilled us all! During the tour we covered 4000 km. only in the interior of France, but we managed to see a lot of nice places in the south, north, west and east of France. The most exciting was our transition from southern France through Paris to our northernmost stop - Brie. After the first festival was the biggest trek - 800 km. And after a 9-hour stay and a walk in Paris, another 320 km. to the northern town of Brie. The first festival was in Manosk. We gave concerts in the cities of Manosque, Luberon, Sereste, Saint Martin, Toul. At the second festival in Brie, after the wonderful performance, we received an official invitation to Brazil for 2008, personally handed by a Brazilian professional ensemble in writing, with all conditions and concerts, from which we were all very happy, because professionals evaluated us and decided that we are the ones we have to present our folklore at their festival! Everywhere we were greeted with joy and hospitality, applauded at all concerts. For the whole tour we have 765 min played time or that's 13h15min. - for 22 concerts. We had solo concerts of 90 minutes each (2 x 45 minutes with a 10-minute intermission) and regardless of the fatigue, we danced several times in the encore! The other festivals were in the cities, Plojevet Euro, Quimper, Cherbourg, Pluwinger, Le treport, and many more. etc., which were not foreseen in our program, but the huge interest and the very good performance of everyone (dancers and musicians), increased the concerts and we played in places where a Bulgarian group danced for the first time. Many friends, many new admirers, many Bulgarians who traveled 800 km. just to see our band perform! On the way back, we didn't miss Vienna with all the sights and the view from above from the Ferris wheel. Next year's invitation to Brazil is our latest challenge! All this became possible with the help of the parents and the good training of the dancers!

Thank you for this conversation! Accept our wishes for new creative successes!